The Top 5 Photography Spots In Bhutan 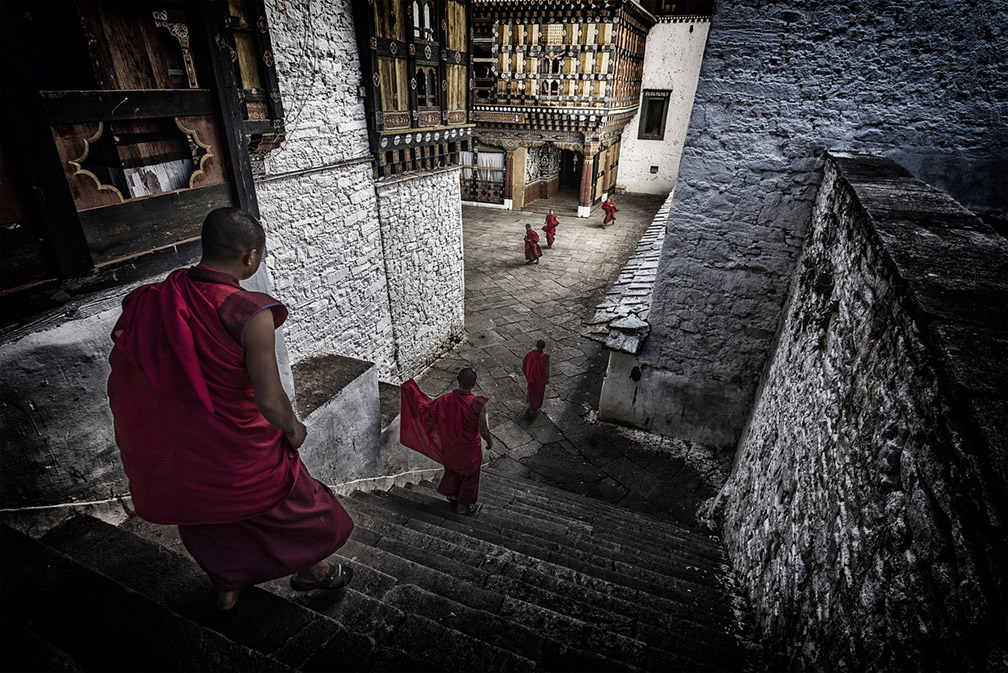 The best photography tours are reliant on a stunning location, and one of the most magical, breathtaking places in the world to capture show-stopping images is the Himalayan paradise of Bhutan. Sandwiched between India and Tibet, tourists have only been welcomed into this remote mountain kingdom since 1974, so much of its timeless serenity remains intact. Bhutan is run by a government who prioritise the Gross National Happiness of their people, so the heart-warming hospitality you will experience is a natural part of their culture.

This sacred Buddhist site built into the steep, granite cliffside is one of the most iconic images of Bhutan. Located in the upper part of Paro Valley, this white-washed monastery was first constructed in 1692 as a site for meditation, sitting at 3,200 metres overlooking the valley floor and river. The name is a tribute to Guru Padmasambhava, the second Buddha of Bhutan, who apparently came to meditate on this spot riding a flying tigress. Tiger’s Nest Temple is conveniently located near the town of Paro, where you will find Bhutan’s only international airport. We recommend an early-morning photo hike to this popular pilgrimage site – mules can be organised to carry gear half way up. To capture the spirit of the locals, visit during the popular Tsechu festival held every March or April. On the road from Thimpu to Punakha sits the Dochula Pass, 10,000 feet above the valley. The route presents a transforming landscape; from semi-tropical, to pine forest, to alpine; with beautiful shots of dwarf bamboo, rhododendron and Grey Langur monkeys possible. At this particular mountain pass in the snow-covered Himalayas, you’ll find hill slopes decorated with hundreds of colourful, religious flags as a mark of peace and respect from the Buddhist people. Train your lens to capture the 200-mile panorama of Himalayan peaks – the best time for this shot is between October and February. This location also offers landscape photographers the scene of 108 memorial Druk Wangyal Chortens, or stupas, built in 2003 by Bhutan’s eldest Queen Mother. Although this isn’t a single location for photography, the Bumthang district encompasses a vast expanse of natural scenery, allowing endless opportunities to capture Bhutan’s landscape, depending where your visit takes you. Bumthang (meaning beautiful field) is the spiritual hub of Bhutan, consisting of four mountain valleys – Tang, Chhume, Ura and Choekhor (Bumthang) ­– containing some of the country’s oldest Buddhist temples. We recommend exploring the valleys over a few days, especially Ura Valley, northeastern Bhutan, which has a good mix of ancient temples and dzongs, traditional farming villages and fields with a unique, other-worldly feel. Ura also hosts the annual mushroom festival, Matsutake, every August. Landscape photography and wildlife photography can combine in an unpredictable moment. The incredibly diverse fauna in Jigme Singye Wangchuck National Park makes this even more likely, with the opportunity of sighting golden langur, red panda, Asiatic elephants, musk deer and even tigers, who use this wildlife corridor. Established in 1995, the park was originally known as the Black Mountain Park. Separating east and west Bhutan, it borders more than 30 small villages and is home to one of Bhutan’s oldest founding tribes, the Oyleps. The Black Mountain area of Bhutan was only accessible by a mule and foot trails until the 1970s, explaining why Jigme Singye Wangchuck is the only park in the country that allows tourists to trek its alpine meadows and snow-capped mountains. Perched dramatically on a forested hill, overlooking the lush, green entirety of the beautiful Phobjikha Valley, sits the newly renovated Gangte Goemba temple complex (or Gangteng Monastery). It includes the monk’s quarters, meditation centres and even a guesthouse. Gangte Goemba is one of Bhutan’s oldest Nyingma monasteries (a school of Buddhism). Its cultural significance allowed recent architectural updates to be completed by some of Bhutan’s most talented woodcarvers, sculptors and painters, so the quality of workmanship on show is a photographer’s dream. You may even spot some of the 300 student monks at the nearby Kuenzang Chholing shedra (a Buddhist college) finishing class for the day.