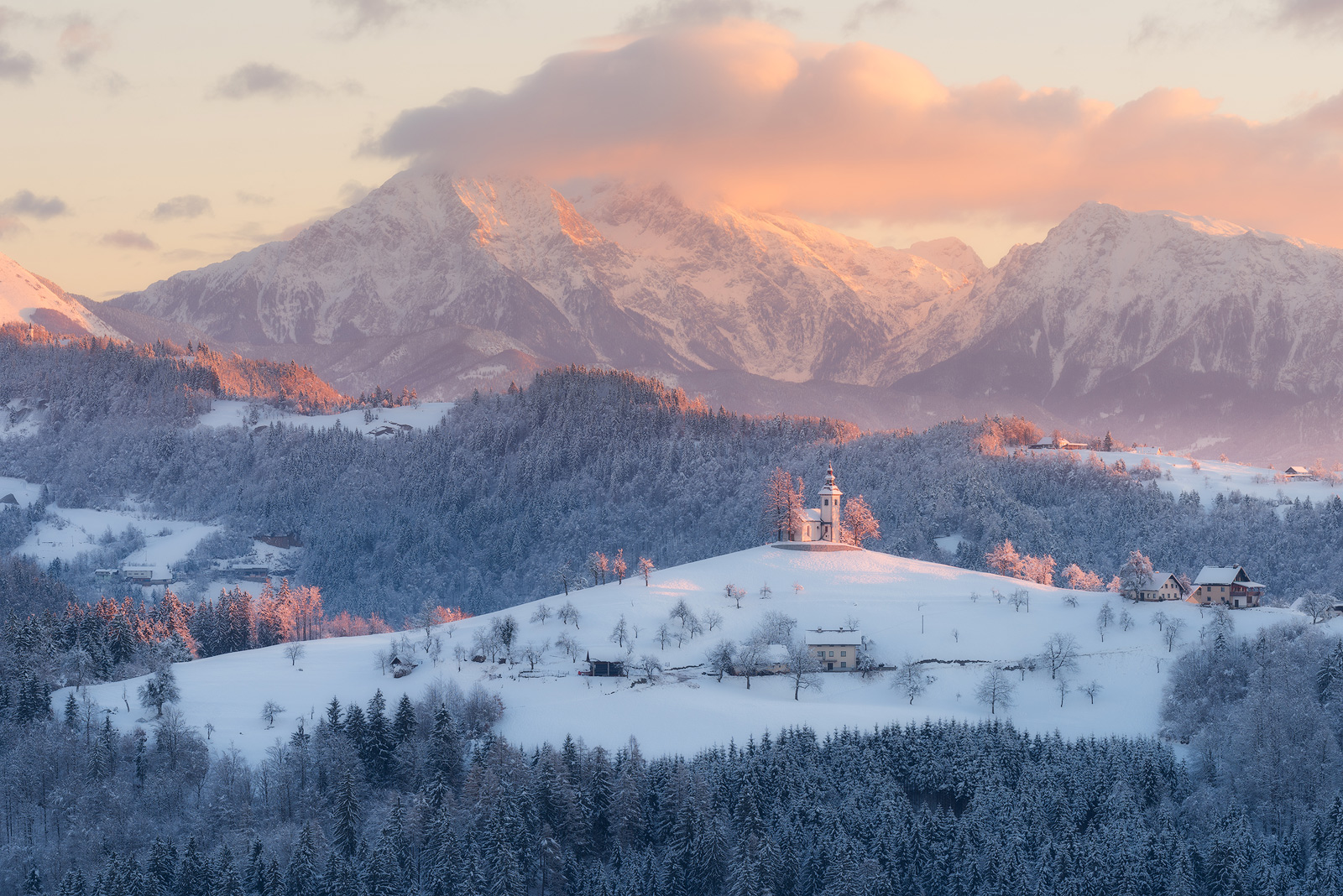 The enchanting Eastern European country of Slovenia offers ambitious photographers an incredible landscape of opportunity. One day you can capture vistas of emerald-green rivers and glacial lakes hugged by rugged mountain ranges. On another you can shoot peaceful panoramas of the dramatically jagged Julian Alps. Visiting Slovenia during the colder months is like setting foot in a winter wonderland – unrivalled green space transforms into something plucked straight from a fairy tale. Simply fly into the 2016 Green Capital of Europe; Ljubljana (founded by Jason and the Argonauts according to legend, for any history buffs) and prepare to explore our shortlist of Slovenia’s Top 5 Photography spots.

It’s unanimous among photographers that Lake Bled is one of the most magical, naturally photogenic spots you could ever have the pleasure of visiting. Guarded by a clifftop medieval castle, the lake has an accessible footpath around its entire border, making it easy to find your winning angle or reflection shot. Most focus on the heart of Lake Bled, where a tiny island sits with a population of one: the Church of Assumption. No need to kayak over and ascend its 99 steps – find the finest shot at sunrise, 645m high at the Mala Osojnica viewpoint overlooking the vast Upper Carniola region, which you can reach from the shore in under an hour. Not a hiker or morning bird? Discover Lake Bled at “blue hour” in the evening, when the water is placid and tourists are enjoying a refreshing Laško from a local bar. Looking at photographs of the colour of Soča River you may think a filter has been applied… But the captivating colour of this water actually flows from alpine snow melt, carving its 138km path artistically through a 750 metre-long gorge, which reaches depths up to 15m! Known as the Emerald Beauty, the river’s contribution to sustainable tourism earned recognition as a European Destination of Excellence (EDEN), also home to the indigenous Soča Trout. Dotted with (mostly) accessible footbridges along its length and accompanying car park bays, you’re spoilt for choice. A dramatic shot featuring the mountainous landscape above the icy canyons and pools hides a bloody past – the largest mountain battle in history took place here, during World War I. Today it couldn’t be clearer how valuable peace in this area is… That is until an excited gang of wild water kayakers paddle past, or a yelp of shock echoes downstream where one brave soul chanced a swim.

You’ll notice something special about Slovenia in the warmer months – you’re immersed in lush greenery almost at every turn. There is no place better to concentrate your photographic adventure than Slovenia’s only national park: Triglav. Officially established in 1981, its vast expanse features the country’s highest peak at its centre, Mt. Triglav, which you may notice is the symbol on the Slovenian coat of arms. Hire a car and explore Triglav National Park for an exhilarating journey starring dense woodland, majestic waterfalls, green hills, sharp peaks and alluring glacial mountain lakes. Visit in autumn for valleys filled with ombre larch forests, or capture alpenglow on Lake Bohinj. While near Lake Bohinj, seek out the “fountain of youth” tucked secretly in its corner, more commonly known as Slap Savica waterfall… 4. Peričnik Falls – for behind the scenes footage

If you’re passionate about landscape photography, Slovenia is one of the best locations to shoot your next masterpiece. At every turn nature seems to show-off with yet another beautiful example of its power – one such site is Peričnik Falls in the Vrata Valley. As two separate waterfalls fused, Peričnik towers over visitors as it cascades down from the valley above over sheer rock face, plunging into the earth before joining the Bistrica Creek. To reach the falls drive along the winding river bank from the village of Mojstrana, park up and walk a few minutes to the base of the 52m waterfall. What sets Peričnik apart from Slovenia’s many falls is the opportunity to walk behind the curtain of water – absolutely breath-taking in winter when the roof is lined with hundreds of needle-like icicles.

Although the Julian Alps cover quite a large region of Slovenia, their isolated appeal deserves a spot of its own on our list of must-see photography locations. Sometimes you’ve just got to climb a mountain to get the best shots! As a section of the Southern Limestone Alps named after Julius Caesar (who apparently founded the town of Cividale del Friuli in its foothills), there is an incredible drama to be captured from either the base or summit of the Julian Alps… your skills can decide that one. Sitting between the Sava Valley and Canale Valley, the Julian Alps encompass Mt. Triglav, Vršič Pass and Predil Pass, a Russian Chapel, even venturing into parts of Italy. We’re fascinated by the chance to stay in Slovenia’s 170+ mountain huts available for hikers in these alps, such as Koča na Gozdu along the Vršič Pass at 1226m altitude. It’s on the to-do list for our next visit! Glenn Mckimmin and Rod Thomas are the Fotoworkshops specialists in Slovenia.