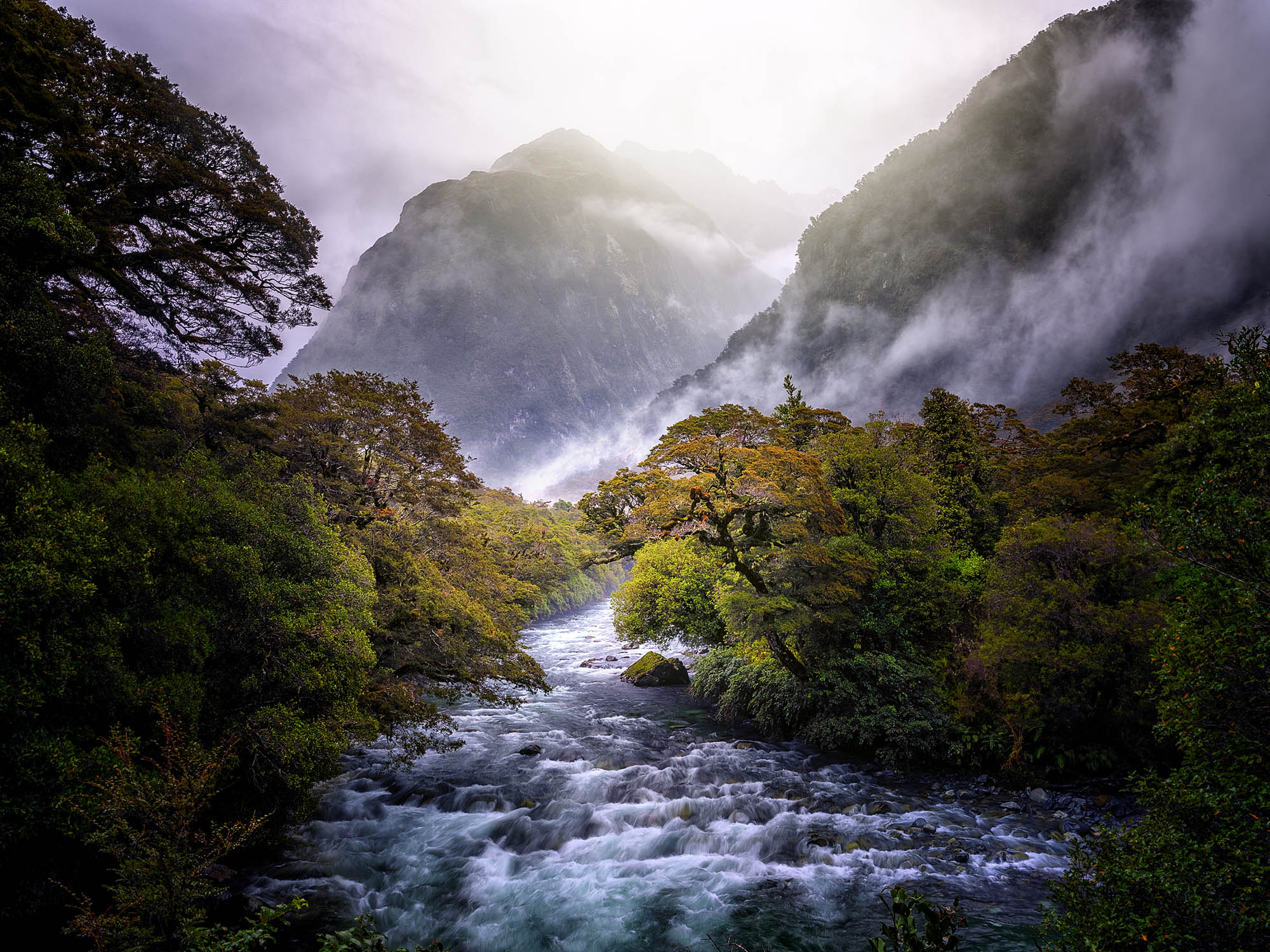 What do The Lord of the Rings, The Chronicles of Narnia and Avatar all have in common? They all showcase the immensely photogenic natural landscape of New Zealand. Despite its hellish sounding location on the Ring of Fire in the middle of the Pacific Ocean, you’ll find a ‘Stairway to Heaven’ (the Paekakariki Escarpment Walkway) along with many other-worldly scenes.

Due to its isolation, New Zealand offers some of the best landscape photography locations in the world including active volcanoes, giant glaciers, wind-sculpted waterfalls and a 90-mile beach. Its snow-capped mountains rival the Swiss Alps and its impressive fjords challenge those of Norway.

Before it was a hotspot for big screen blockbusters, the first Maoris to land on shore called it ‘Aotearoa’, meaning ‘the long white cloud’. Today, this country is one of the most generous locations for a landscape photography tour. Changeable weather constantly creates original scenery for your shoot, with the ease of travelling between the east and west coast in just a few hours.

These two notable glaciers located on New Zealand’s South Island terminate near sea level in the temperate rainforest of Westlands National Park. The Franz Josef Glacier is a 12km long river of maritime ice that carpets the landscape from the high peaks of the Southern Alps down to its west coast cut-off point 300 metres above sea level. Fox Glacier is larger (13km long) but less steep than Franz. There’s a kink in its design making it slower at responding to environmental changes causing an ice advance or retreat. Traverse or aerial photograph either as they’re highly accessible, but be quick – global warming unfortunately means they are receding rather rapidly, leaving fast-flowing rivers in their place. 2. Lake Wanaka, South Island – for Mount Roy and that tree

Lake Wanaka in the Otago region may be New Zealand’s fourth largest lake, extending more than 300 metres in depth, but it offers some of the most dramatic shots. An iconic viewpoint overlooks the lake on one of the best South Island day hikes for photographers – the hike up Mount Roy. A simple 6-hour round trip to the peak offers plenty of great photo opportunities as you climb (mostly on its exposed, eastern side, so come prepared), to finally reach the spectacular summit. Tramp (Kiwis call a walk a ‘tramp’) slightly beyond the peak’s lookout point to where the radio towers stand for views of Mount Aspiring National Park, the Southern Alps and Lake Wanaka itself. As for capturing that famous willow tree – it’s located near the shoreline, but be prepared to share this popular shot! Who ever said Mount Cook was so special? Mount Taranaki, also known as Mount Egmont thanks to Captain Cook, is an active stratovolcano located on the west coast of New Zealand’s North Island. It’s over 120,000 years old with one of the world’s most symmetrical volcano cones, looking a lot like Japan’s Mt Fuji! Due to the area’s high rainfall and mild costal climate, luscious rainforests exist on the mountain’s slopes. Climbing to the peak is extremely accessible and doable in a day – try to include an uphill hike to the Pouakai Tarns (alpine pools) for brilliant reflection shots. If your photo tour is laden with camera equipment, it’s easy to drive around the mountain to select your preferred shot from one of the main roads – Manaia, Egmont or Pembroke Road. 4. Church of the Good Shepherd, South Island – for astrophotography

On the shores of Lake Tekapo sits a little, stone chapel on a barren landscape dotted with tufts of matagouri bushes, framed by the Southern Alps. Whether you decide to pray for good weather is totally up to you, but a visit to this beautifully remote site is highly recommended. Located in Mackenzie Country, in the central area of New Zealand’s South Island, Tekapo is known for hosting incredibly clear night skies. The world has noticed, as in 2012 it was declared an International Dark Sky Reserve. If you’re an astrophotography enthusiast with a knack for catching the Milky Way, this spot is for you.

Not actually a sound, but a fiord, this is one of the best places to photograph in New Zealand according to numerous international travel awards. It’s also one of the wettest places in New Zealand. Located in Fiordland National Park, Milford Sound runs 15km inland from Dale Point ­– its mouth at the Tasman Sea – lined by sheer, rocky edges reaching more than 1,200 metres high. Stirling Falls and Lady Bowen Falls plummet down its sides overlooked by peaks such as the looming Mitre Peak, The Elephant and The Lion (yes, they look like they sound). Watch for local wildlife like fur seals, penguins, dolphins and whales, especially the humpback and southern right whale. The road trip to Milford Sound from Queenstown is magnificent in itself, cutting through vast mountains and luscious rainforest.

New Zealand is always a winner for photography especially on our annual Autumn Colours Photo Tour.